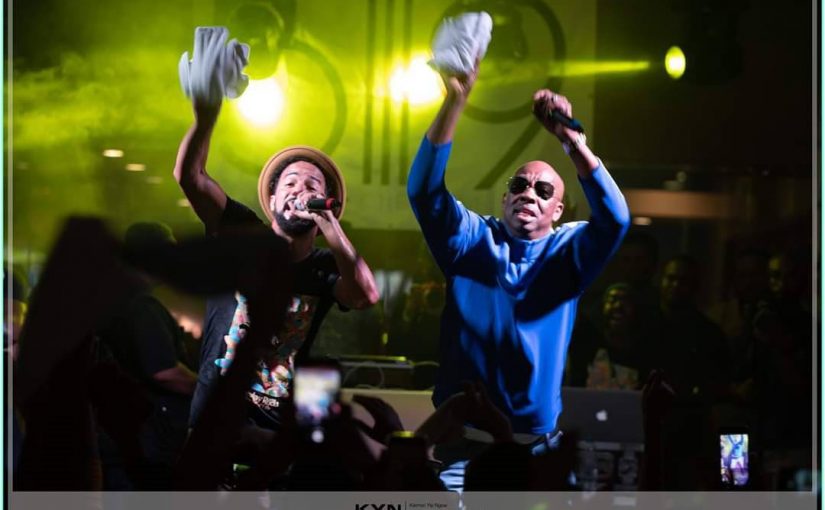 THE last stop of Kees Dieffenthaller’s Tuesday on the Rocks 2020 pre-concert tour climaxed with soca veteran, Neil "Iwer" George, storming the stage to perform the pair’s collaborative hit, Stage Gone Bad, which sent the packed 519 restaurant and C3 Centre courtyard, into a frenzy.

During their explosive performance, Dieffenthaller paused for a short while and questioned the energetic crowd about the song’s chances of capturing the Road March title. He has never won Carnival’s most coveted musical crown, having placed second with Savannah Grass to Machel Montano/Bunji Garlin/Skinny Fabulous’ Famalay in 2019.

“I never win it (Road March) before yuh know. It could be my first. Allyuh feel this song good for (the road) this year?” he asked, receiving roars of agreement and support from the chanting crowd.

For the 2020 Carnival season thus far Dieffrenthaller has released a medley of collaborative pieces featuring TT’s most popular soca artistes such as Voice (Dear Promoter), Erphaan Alves (Pick A Side) and Jimmy October (Magic). He has also released songs with top music producers Travis World (Proud) and DJ Private Ryan (Reason To Love).

However, Dieffrenthaller told the crowd that working alongside Iwer on Stage Gone Bad was one of the best experiences of his soca career thus far.

“I must say, doing this track with Iwer was one of my highlights as a soca artiste. I’ve never had so much fun making a song with anyone else before. Tune for the road!” he said on stage.

Prior to their dynamite finish, Dieffenthaller performed favourites including Wotless, People, Savannah Grass and Radar. His annual Tuesday on the Rocks Concert is on February 18 at the Queen’s Park Savannah, Port of Spain.