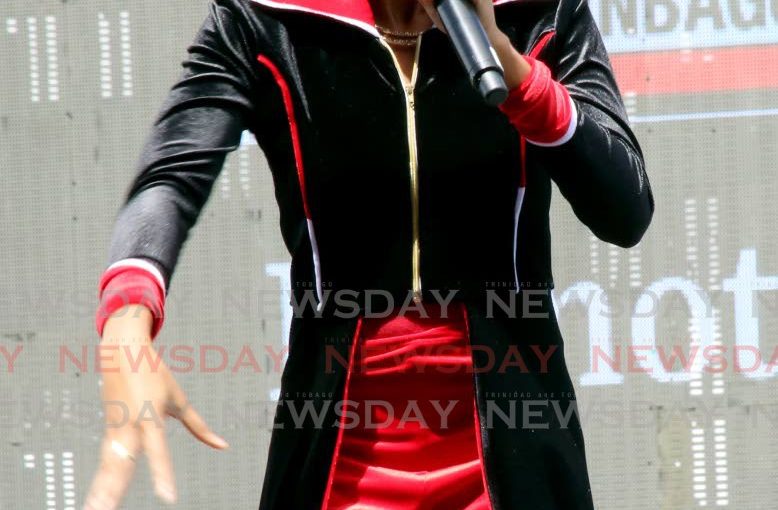 Twice is definitely nice! Four years after she first lifted the crown at the tender age of 14, Holy Name Convent, Port of Spain student Sharissa Camejo did the repeat on Monday when she was crowned this year's Junior Calypso Monarch at the Grand Stand, Queen's Park Savannah in Port of Spain. She beat out 15 other students in the finals with her nation-building song, Everything We Can, and brought to an end the competition which began with 159 youngsters competing in the prelims at schools across the nation. For her performance, Camejo bagged a cool $25,000 cheque, a trophy and tickets to Barbados. After being announced the winner, the elated youngster reminded reporters of her victory four years ago when she sang, Our Blessed Land en route to winner's row. Camejo's 2020 offering, penned by her parents Enrico and Akella Camejo, encouraged people to do everything they can to help make the nation a better place. “The song was about building up TT, telling them despite everything that is going on in the country, despite all the people that are doubting us, we need to rise up and build back our nation...together.” She came on stage dressed in the national colours, red, white and black with a prop - a toolbox - being wheeled onstage behind her by fellow schoolmates. In the toolbox, she sang, were different qualities which would help build the nation. They included unity, respect, appreciation governance, service, and of course, TT's watchwords: Discipline, Production and Tolerance. She sang and gave a message intended to be a rallying cry to the nation to unify and develop TT. “Now is the time, we must make a stand, let us do everything we can,” Camejo sang. She later thanked her mother Akella for the idea for the props which accentuated her performance. “My mother has the most creative mind and with my dad’s support, it just came together. I had a little input along with my brothers as well. The results were just amazing. It feels like all my hard work paid off. I just have to thank God for everything because when competition time comes around, so many things are happening and it seems confusing a times.” Camejo said she intends to defend her title next year before preparing for a foray into senior calypso competitions. Ta’zyah O’Connor, of St Mary’s College, son of calypsonian Duane O’Connor, took second place with his song Break De Silence – a song which called for men to step forward and speak out against their problems. He won the crown in 2018. In third place was one of the youngest of the competitors, ten-year-old Kai-Anthony Salazar of St Michaels Anglican School, with his song, Be the best. Hundreds of students braved the rain to support the competitors at the Grand Stand on Monday. The finalists chose a range of social issue topics to sing on including child marriage, calypso history, love for TT culture, drug addiction and child abuse. A definite crowd favourite was Josiah Jordan of Morvant Laventille Secondary who encouraged people to get a conscience, and if they could not get one, download it from the Google app store. He even knocked the style of clothes some youths now wear. “Them fellahs with their boxers exposed, it is time you learned to put on clothes,” he sang as the crowd laughed and cheered. Even the rain could not stop the young calypsonians from performing, as they walked out on to the stage with clouds in the background, but the performances still had to be paused because of the weather. Cayla Allen, who placed 13th had to be called off the stage because of the rain but it did not seem as though she minded as she sang her song, Smile. Minister of Education Anthony Garcia congratulated the Trinbago Unified Calypsonians’ Organisation (TUCO) for putting together a successful competition. He said government will support any stakeholder willing and able to continue promoting and maintaining TT's culture. He said competitions such as the Junior Calypso Monarch affords teachers an opportunity to give lessons for things that are not readily taught in schools. “Education is not just academic,” Garcia said. “The things that we teach outside the school is also important. It is called the ‘hidden curriculum.’ This teaches competition, accepting failure and accepting success,” Garcia said. He also congratulated the seven past junior monarch who have moved on to the finals of this year’s senior calypso monarch finals. PLACE THIS IN A BOX Jnr Calypso Monarch results 1st: Sharissa Camejo, Holy Name Convent, PoS – Everything we can 2nd: Ta’zyah O’Connor, St Mary’s College – Break de silence 3rd: Kai-Anthony Salazar, St Mary’s AC School – Be the best 4th: A’Janae King Fraser, St Francois RC School – Tempted and tried 5th: Aaliyah Hinds, Mt Hope Secondary – A child bride 6th: Mitchila Williams, Signal Hill Secondary – Warriors 7th: Annalise Emmanuel, St Joseph Secondary, St Joseph – Zessa man 8th: Josiah Jordan, Morvant Laventille Secondary – Download a conshunz 9th: Joshua Hinds, St Benedict's College – Luv up meh culture 10th: Caleb Hinds, St Benedict's College – Be the change 11th: Faith Haywood, Holy Name Convent PoS – Restore my beauty 12th: Kerston Millar, Bishops High School – Search inside 13th: Cayla Allen, Sacred Heart Girls RC School – Smile 14th: Bethany Lightbourne, University of the West Indies – Calypsonians are champions 15th: Naomi Sinnette, Bishop’s Centenary College – Damaged children 16th: Atiya Lynch Pentecostal Light & Life Foundation – If you can