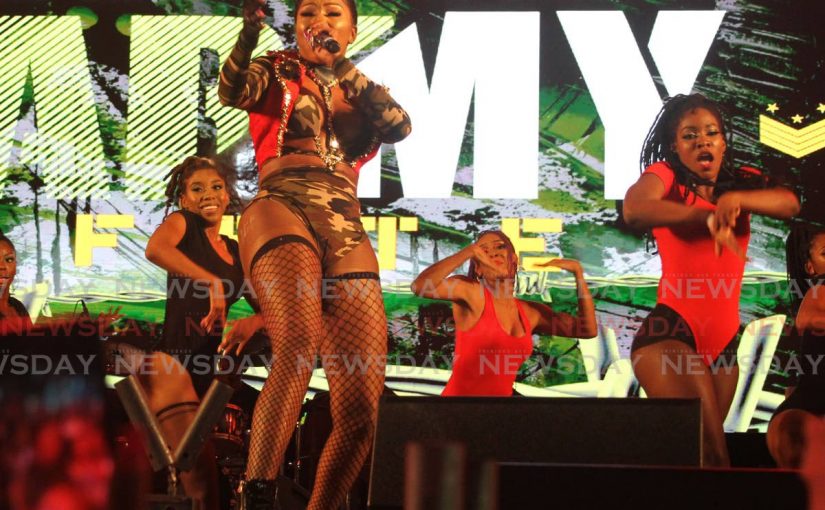 ON Friday, 24 artistes will compete in the finals of the 2020 International Soca Monarch (ISM). In the power category, 11 artistes will seek to be crowned the new monarch after the withdrawal of defending monarch Mr Killa (Hollice Mapp). In the groovy category, 11 will compete with reigning monarch Swappi (Marvin Davis) for the Groovy Monarch. Notably absent on this year's list of ISM finalists are women. This comes after only six women competed across both categories in the semi-finals on February 2 at Arima Velodrome. The notable under-representation of women in this year's ISM has brought into focus the status and success of women in the competition, throughout its history. Fay Ann Lyons-Alvarez became the first and only woman to ever win the power category in 2009. In that same year, Lyons-Alvarez became the second woman to win the groovy category. In 2005, Michelle Sylvester was crowned the first female Groovy Monarch which was the same year of the groovy category's inception. Asked about the under-representation of women in this year's finals, Lyons-Alvarez said, "I watched the ISM this year and saw some really good female performers. I actually saw at least three women that should have been in the finals." Recently stepping down as chairman of ISM, Lyons-Alvarez said she does not have much comment to provide but said if the public were to compare this year's production against the one, under her chairmanship they would see two different quality products. [caption id="attachment_810945" align="alignnone" width="685"] 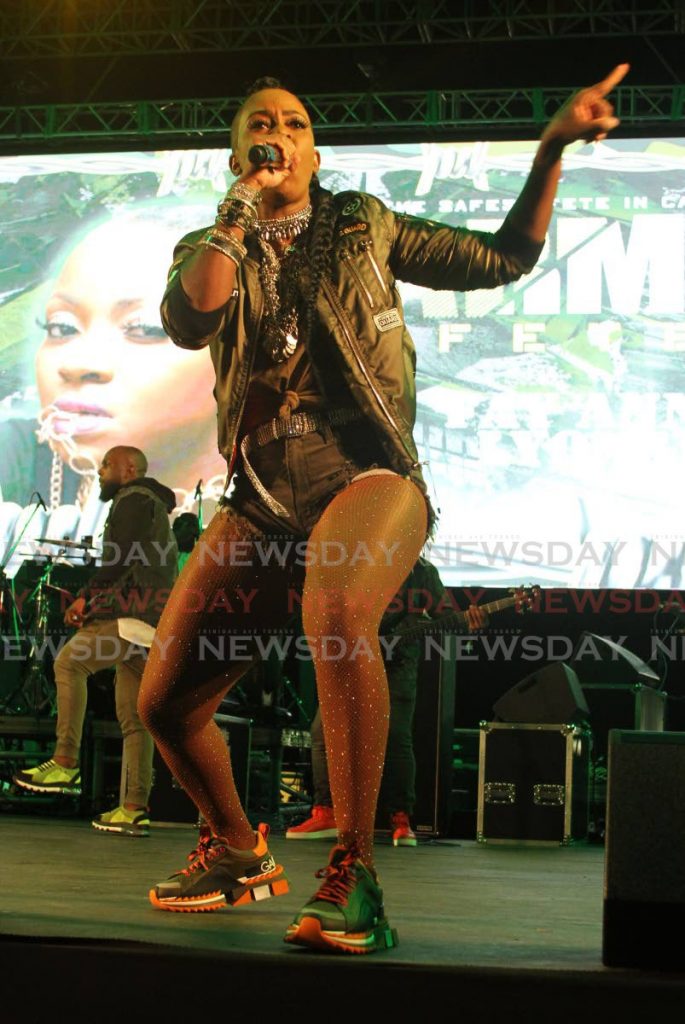 Fay Ann Lyons-Alvarez is the first and only woman to ever win the Soca Monarch power category in 2009. That same year, she became the second woman to win the groovy category. - Ayanna Kinsale[/caption] To gain insight into the representation and success of women in the ISM, Newsday researched the number of women qualifying for the finals between 2006 and 2020. This 14-year period was selected based on information available on ISM finalists throughout the years. Between 2006 and 2020, there was an average of five women making the finals per year. Of these finalists Patrice Roberts, Lyons-Alvarez, Destra Garcia and Nadia Batson were the most frequent participants with several other women making brief appearances in the competition. Since Lyons-Alvarez's 2009 win, the highest placement by women have been Lyons-Alvarez in second place (2010), Garcia in third (2011-2013) and second position (2014), Nikki "Granny" Crosby in third (2015) and Patrice Roberts in third (2016). Between 2017 and 2019, no woman placed in the top three. Gender studies lecturer Dr Sue Ann Barratt, commenting on the trend, said the question arises about what motivates women artistes to compete and how they are judged. "This low representation raises the question, why do some women artiste do not participate or if they do attempt, what is the basis of selection, how are they selected, what is the shortcoming?" queried Barratt, who lectures at the Institute for Gender and Development Studies at UWI, St Augustine. She has a doctorate in interdisciplinary gender studies, and has also done research in cultural studies. "We have a tradition of strong women artistes and performers. I would say that it is difficult to pinpoint a specific reason for the lack of representation," she said. Barratt does not think there is a deliberate under-representation of women, and factors in the overall participation of women in the competition as a good start to understanding the issue. She juxtaposed what may be a low participation of women to the decline in recent years of more prolific artistes in the ISM. She said this raises a serious discussion about the ability of the competition to attract artistes. "Why are some of our very strong artistes not participating? Why don't they choose to participate? "A useful strategy (to increasing participation) will be to establish what motivates people to participate in the ISM. I remember the ISM was the biggest show and everybody wanted to be in it." Barratt said having these conversations will help to understand the problem and find a solution. She thinks proper development of the ISM in terms of advertisement, transparency and presenting the competition as a viable route for success, can make it more attractive to women. "Is it that women are not qualifying or women are just not entering? Soca artiste Jadel (Jardine Legere) was one of the only six women to perform at this year's ISM semis. [caption id="attachment_810944" align="alignnone" width="1024"] 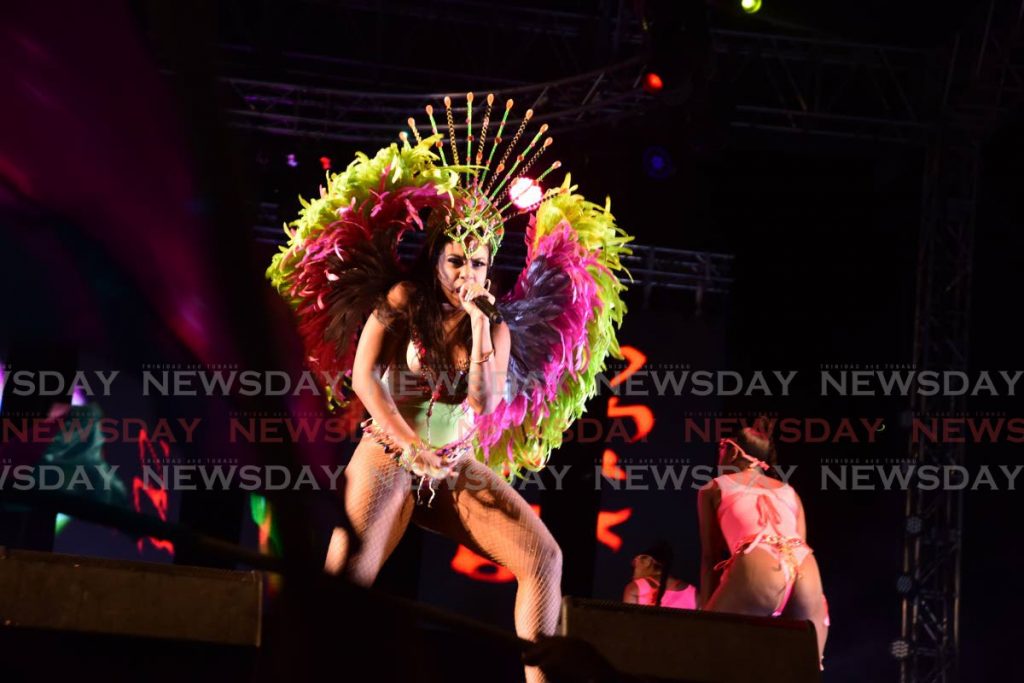 Jadel performs Priority at the semi-final rounds of the ISM 2020 competition on February 2, at the Arima Velodrome. She was one of the only six women to perform at this year's semis. - Ayanna Kinsale[/caption] Asked her thoughts on why she and the others failed to qualify for the finals, Jadel said, "I don't know if they (the judges) literally didn't feel females brought their A-game. It's a question that everybody has been asking, at least why there wasn't one female in the finals." For Jadel, it all came down to the judges but does not believe the under-representation of women is a reflection of what the overall competition leadership wants. Asked what she thought may be a solution, Jadel said, "They can make it mandatory that at least three females get in if they realise that it (the finals) is boiling down to males." While she believes the current under-representation of women is a rough patch in the ISM, she said hopefully judges are given better advice next time around and understand that there are people who want women in the finals. "It's not just about the wining and the craziness alone, you have to make your competition as fair as possible all-round, even gender wise." Despite not qualifying for the finals, Jadel expressed thanks for securing a spot in the semis. She said while she did not know why her performance did not meet the mark on the night, she is open to constructive criticism.

The post Women lose their groove in Soca Monarch appeared first on Trinidad and Tobago Newsday.