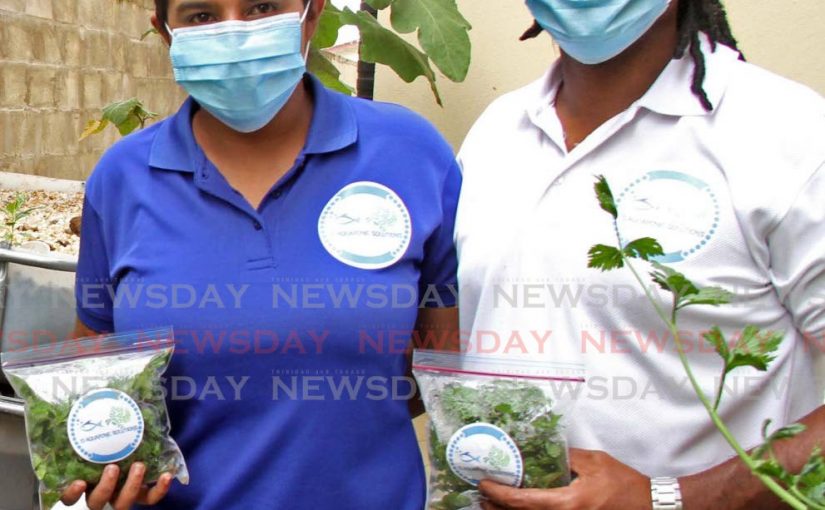 Aquaponics, an alternative to traditional land agriculture, is one mechanism that is being pushed in the agriculture sector. It is an integrated system using two methodologies – aquaculture and hydroponics. Aquaculture is the breeding, raising, and harvesting of aquatic organisms in controlled or semi-controlled conditions. It is considered a healthier and environmentally responsible source of food and commercial products. Hydroponics is propagation of crops in a soil-less system. At the Aquaculture Demonstration Centre in Valsayn, managed by the Fisheries Division of the Ministry of Agriculture, Land and Fisheries; information on aquaponics farming, through demonstrations and live teachings sessions are available to the public at no cost. According to fisheries officer Harnarine Lalla there is a significant market for aquaponics farming in TT as more and more people are seeking alternatives of “clean food.” [caption id="attachment_832065" align="alignnone" width="1024"] 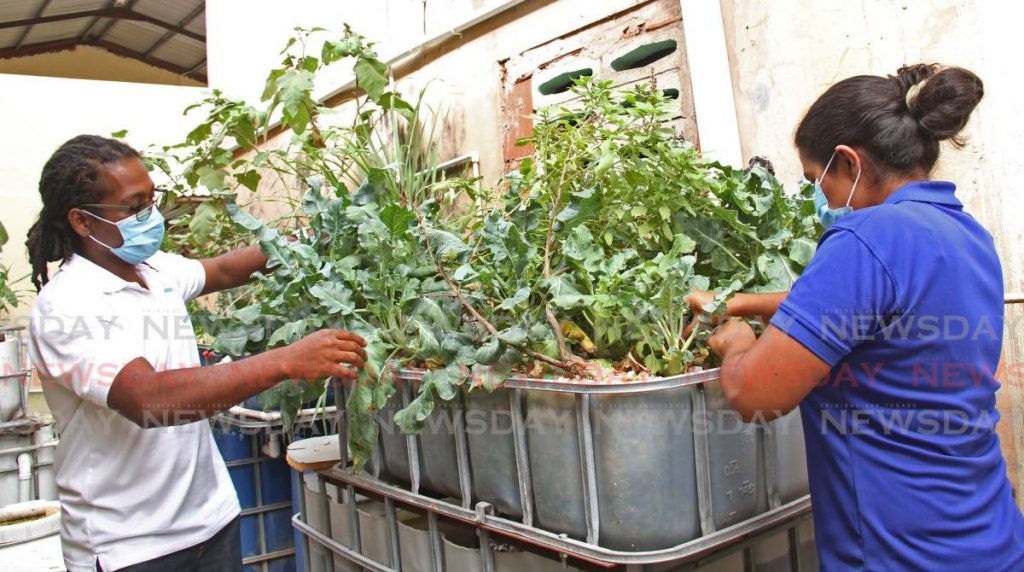 Dillon Kurban and Kristy Naidoo show the crops that could be grown in an aquaponics system. PHOTO BY Vashti Singh - Vashti Singh[/caption] He said, “It is important for people who want to grow their own food and for people who want 'clean food.'” Aquaponics rarely uses fertilisers which are primary nutrient sources of food for cops in other types of farming. “In aquaponics, fertilisers are not the primary source of nutrients for the crops. It is the waste from the fishes in the system that are broken down to provide the nutrients. Pesticides are avoided because of the added component of the fishes in the system.” Lalla noted that the aquaponics sector does not contribute significantly to local agriculture because it does not have adequate marketing to get people involved. “We have people involved but on a subsistence level. Those who produce on a little larger scale have individual customers or restaurants who purchase from them directly, because they are willing to pay a little more than the normal price for the produce. “There are no large-scale suppliers of crops grown via an aquaponics system to supermarkets or for exports, even at a regional level. Because it is niche marketing it is unlikely that the farmers can supply the amount in demand by the supermarkets,” he said. Lalla added that with the growing concern for “clean food”, farmers have been considering ramping up production but believed it would have to continue being niche marketing for regional and international trade. “Aquaponics produce can be developed but getting the fresh produce to the clients in a timely manner, especially outside the borders, will be a challenge. The produce needs to be delivered as quickly as possible to prevent deterioration,” Lalla said. Lalla noted that starting an aquaponics farm is not hard but it would take a lot of dedication to commission a system for profitable gains. He said, “The ones (aquaponics farm) that are best for commercialisation would be the deep-water/floating raft systems or the nutrient film techniques (NFT) which utilises PVC pipes. These systems can be set up either horizontal or vertical.” “The verti-grow systems, where the pipes are laid out vertically, saves space and it is one that is used to maximise the number of plants grown. As such the profitability of commercialisation would be determined by the type of system used.” The average cost of start-up, he said, is about $25,000 for a system that can generate profits, but this cost can be altered based on the type of system chosen and the amount of personal labour invested. Lalla said while most people get involved in aquaponics for subsistence farming, it should be considered a good investment to generate additional income. “It is best suited as a side-line activity for people who may want to get some extra earnings. It does require time, like any other farming and the size of the aquaponics farm will dictate the amount of time spent on it. “The advantage with have such a farming is that the farmer can determine when time should be spent on the farm. The time set aside can either be early morning, evening or early in the night, which is best suited to take care of the crops.” [caption id="attachment_832064" align="alignnone" width="1024"] 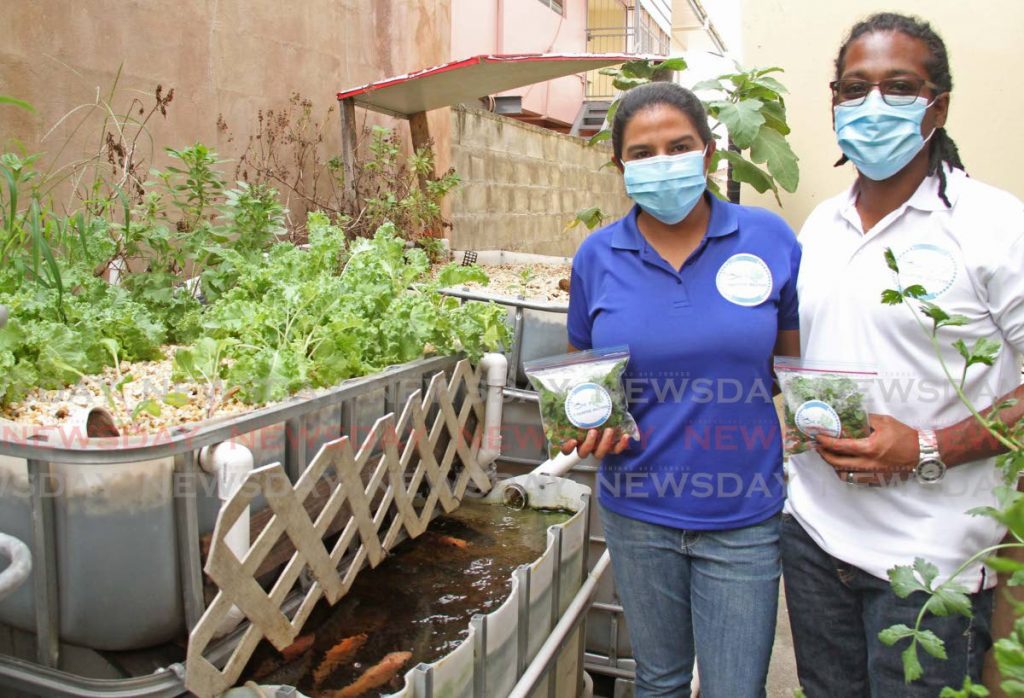 Dillon Kurban and Kristy Naidoo, directors of 3D Aquaponics Solution in Couva, cater for consultations and setting up of aquaponics systems of all types and sizes. They show a simple system that could be set up in a back yard.
PHOTO BY Vashti Singh - Vashti Singh[/caption] Lalla noted the types of crops that can be grown by an aquaponics system will depend on the type of system used. For example, a NFT system will cater better for leafy crops, while crops like peppers and tomatoes are best suited for the Dutch bucket system, which would allow room for added support systems to hold the crops to avoid tipping over. In 2019, North America occupied the largest share in the aquaponics market, globally, with the US contributing the largest share followed by Canada. Although aquaponics is still a significantly small industry in the region, it has shown signs of growth. Head of the Agriculture Society of TT Dhano Sookoo said with adequate investment from government and private sector, the local aquaponics sector can be developed to compete in international trade. She said, “This is capital intensive industry and local farmers just to do not have the funds to put out on their own to compete at such a level. With the necessary capital investments and market support, TT aquaponics can expand start small and expand regionally.” Director at 3D Aquaponics Solution Kristy Naidoo told Business Day that aquaponics farming has truly been an eye-opener towards crop production as it not only offers financial benefits but also contributes to healthy living and a safer environment. Naidoo said, “Traditional farming causes 70 per cent of the world water’s pollution because of the run-off from the chemicals and it is also of the largest contributors to deforestation. This (aquaponics) is one way to protect the environment and have sustainable agriculture.” 3D Aquaponics Solution, which was launched in 2017, is located on Southern Main Road, Couva and caters for consultations and setting up of aquaponics systems of all types and sizes. According to Naidoo, aquaponics is a viable source of additional income and she encouraged people to get involved in some type of production. “Although it has a high set-up cost, the systems once managed properly can pay back for itself within a year. “It can save someone almost $3,000 on their grocery bill or can even add to the household income if entered into as a business venture on a small scale.” She noted that the set-cost for a basic home system runs between $3,000 to 15,000 while a basic commercial system falls between $20,000 to $25,000. Naidoo said while there are challenges within the aquaponics sector, institutions, such as ExportTT, have opportunities to assist with business development. She said, “Because the produce is organic, there are markets locally, regionally and internationally for it. Once there are adequate amounts of commercial systems then TT can compete with the supply and demand. “Unfortunately, bureaucracy for export is also a deterrent to get produce to other markets on time. There is too much red-tape to get things shipped externally because of the number of compliances. “While the compliances are there to ensure safety of the foods, the timeframe in which it is carried out is too long. If that timeframe can be decreased, it would help a lot.” Naidoo noted that aquaponics is the way towards eating local and eating healthy.

The post Aquaponics the path to local, healthy eating appeared first on Trinidad and Tobago Newsday.