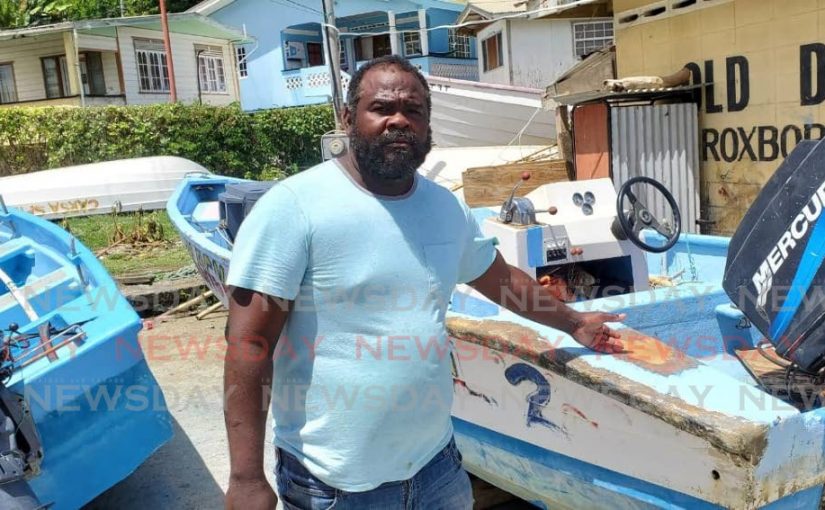 NINE months after Tropical Storm Karen hit Tobago, fisherman Shervon Mc Pherson is yet to recover from the financial blow. Mc Pherson, 31, is one of nine Roxborough fishermen whose boats were severely damaged in the storm, which hit the island on September 22, 2019. He had bought his fishing boat just three months before. Speaking to Newsday Tobago, on June 12, at the Roxborough Fishing Depot, Mc Pherson said his boat’s structure and engine were badly damaged. He said he is now struggling to support his two children, ages 13 and six. To compound matters, the soft-spoken fisherman said he still has to pay monthly instalments to a commercial bank for the $40,000 loan he took to buy the boat. “Things hard because I cannot fish the way I would like. And I eh even make no set of money to see about meh two children.” Like the other affected fishermen, Mc Pherson said he is disappointed he did not receive any assistance from the Tobago House of Assembly (THA) when representatives, including former Chief Secretary Kelvin Charles, visited the area after the storm to assess the damage to the boats. Food Production, Forestry and Fisheries Secretary Hayden Spencer told Newsday Tobago on June 9 there is a system to assist the fishermen. “There is a process by which the fishermen in Tobago are assisted in disaster times. They make a report to the fisheries department. The fisheries department also gets TEMA (Tobago Emergency Management Agency) involved and the fishermen are compensated for their damage to their vessel,” Spencer had said. [caption id="attachment_832002" align="alignnone" width="1024"]

Shervon Mc Pherson shows the damage to his boat by Tropical Storm Karen last year. -[/caption] Spencer added the process has long been established. McPherson's plight has been made worse with the covid19 pandemic which has crippled businesses for the last three months. Mc Pherson said he applied for the salary relief grant but has yet to receive anything. “We keep asking (about the grants) but we have gotten no answers.” He is contemplating taking another loan to either fix his damaged boat or buy a new one. “But ah don’t even know if I will get the loan because I am still paying off this one.” In the meantime, Mc Pherson said he has been fortunate to get a pirogue from a friend to earn some money to support his family. Mc Pherson’s uncle Brian Daniel also got his boat damaged in the storm but was able to repair it. Daniel said, “I was fortunate to do some work on my own and get it back. I did not have much damage as the others.” Daniel, who started fishing at 13, said several of the affected fishermen are out of work. He said his nephew was lucky to get a boat to help make ends meet. “The engine he is using now is a smaller engine to the one he had. So that will restrict him in going out further into the sea to catch more fish.” He said fixing a boat with a damaged engine can be costly. PDP WANTS VILLAGES THRIVE Progressive Democratic Patriots (PDP) political leader Watson Duke has been on a drive helping fishermen repair boats and aiding people finish home construction and complete repairs. He said the village is suffering because they cannot go out to catch fish. Duke has been trying to assist the fishermen through the party’s recently-launched community initiative. “These are persons that not only feed their family but also feed the community,” said Duke, who is also the Roxborough/Delaford representative. “So, it means there is a shortage of fish coming in while at the same time there is a shortage of money going towards their family.” He estimates the village has lost millions of dollars because of Tropical Storm Karen. “Roxborough has its own economic system and it has not been protected nor is it being cushioned by the Government.” Duke added: “This is why I have said the Progressive Democratic Patriots is about village economy. We want to see economies thrive in the village, that not only must residents work but they must have sustainable jobs.” He said instead of the Government investing in large projects like the Roxborough Fire and Police Stations “and then pulling out and going,” the skilled villagers should be hired to work such projects. “So, when they leave, is workers leaving but their money staying. We want that their money stays here and that is why we are bent on fixing homes with the tradesmen that are skilful, for free. “We are letting Trinidad and Tobago know within the villages on this island, there are people who are able to make them self-sufficient. Employment in every village could be sustainable.” Duke said the number of new houses in a community is a good indicator of how well the area is progressing. “If there are unfinished houses in a community, the community is not doing well. If there are unschooled children in the community, it is not doing well. If there are lot of sick people, especially with lifestyle diseases, the community is not doing well.” Duke said these are indicators that the community has been forgotten for the bigger projects. “I believe people have a right to become self-sufficient. Not a soup kitchen as the PNM has tried to encourage over the years.”